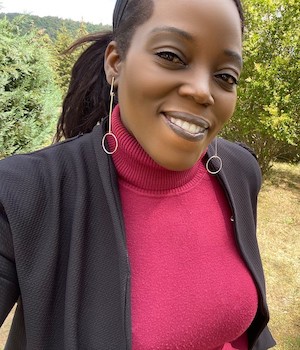 Allison Williams is a self-described structural microbiologist, interested in the interacting networks of bacterial nanomachines and how they sustain life through cellular communication. She is primarily interested in the molecular details of signal transduction and the assembly of the cell wall, that is carried out by complex nanomachines in pathogenic microorganisms.

She says her interests in science was influenced by her mother, an educator and elementary school principal who encouraged her to explore her curiosity about the physical and natural world. This lead her to a well-traveled training path, starting at the University of Massachusetts, with an undergraduate degree in biochemistry, followed by PhD program at Duke University under the tutelage of Professor Christian Raetz, and a post-doc in the Laboratory of Professor Brenda Schulman at St. Jude’s Children Research in Memphis. She then traversed the Atlantic for a Post Doc with Professor Ivo Boneca, followed by an Assistant Professor position at the Institut Pasteur in Paris, where her work focused on visualizing and understanding the structural basis of cell wall polymerization by uncharacterized enzymatic machines and how mega-structures facilitate the bacterial stress response and adaptation to adverse environments. Along with her partner and two children she is now moved to UCSF!