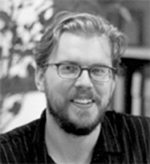 My lab studies the regulation and dynamics of the eukaryotic cytoskeleton, particularly how motile cells establish polarity and use actin polymerization to propel themselves forward. This process, called amoeboid motility, is responsible for correct development of multicellular organisms; for wound healing; for proper function of the immune system; and for remodeling and regeneration in the nervous system. Loss of regulation of this process can contribute to invasion and metastasis of cancerous cells so understanding the mechanics and regulation of amoeboid motility is fundamental to understanding many basic biological processes.

We attack this problem by asking three questions:

The forward, or leading edge of a motile cell is a highly specialized structure - containing an extremely dense meshwork of actin filaments built and maintained by a particular subset of actin-associated proteins. Filaments assemble at the membrane and drive it forward (Mogilner and Oster, Biophys J. 71(6):3030-45, 1996) and behind the advancing membrane filaments are disassembled (Theriot and Mitchison, Nature 352(6331):126-31, 1991) so that the actin network at the leading edge churns forward like a tank tread.

We do not understand exactly how extracellular signals are converted into three dimensional structures that accomplish specific tasks but I suspect that the basic principle, if not the molecular mechanism, is conserved across evolution. We previously proposed a design principle for protrusive structures, called the Dendritic Nucleation Model (Mullins et al., Proc. Natl. Acad. of Sci. USA 95:6181-6186, 1998). In this model the assembly of individual actin filaments and their organization into higher-order structures are specified simultaneously. This appears to be accomplished in most eukaryotic cells when a single cellular factor, the Arp2/3 complex, initiates polymerization of new actin filaments and simultaneously crosslinks them into networks with unique mechanical properties (Mullins et al., Molec. Biol. Cell. 9:841-852, 1998). In Acanthamoeba castellanii, the Arp2/3 complex is absolutely required for such signal-induced actin polymerization (Mullins and Pollard, Current Biol., 9:405-415, 1999). The Acanthamoeba Arp2/3 complex also crosslinks filaments in a unique end-to-side geometry to create a branching arbor of actin filaments which behaves like a rigid elastic solid.