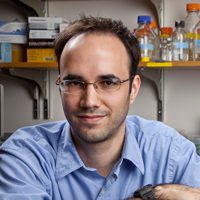 My research is on foundational technology development and demand-meeting applications of DNA nanotechnology.

In the foundational category, I was lucky enough to work in William Shih’s laboratory to contribute to papers on 3D self-assembly of DNA origami (’09 Nature 459:414–8) and a project led by Hendrik Dietz to create twisted and curved DNA structures (’09 Science 325:725–30).

My first work in the application category was in collaboration with James Chou at Harvard Medical School. Dr. Shih, Dr. Chou, and I developed DNA-origami nanotubes for partially aligning membrane proteins in solution to facilitate NMR structure determination (’07 PNAS 104:6644–8). To our knowledge, this was one of the earliest structural-biology applications of the DNA-origami method.

My most significant contribution thus far has been leading development of a computer-aided design software system called cadnano that enables rapid creation of DNA origami shapes and devices. The project has benefited greatly from many contributors.

Finally, with generous support from the Wyss Institute and inspiration from iGEM, I also founded the BIOMOD competition in an effort to seed the growth of a larger community of young researchers in bionanotechnology. Again, this was done with the help of many people.